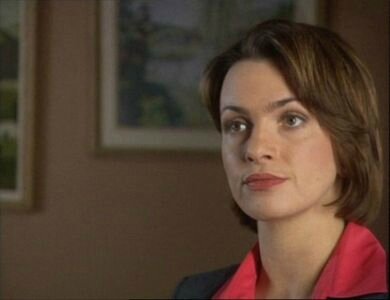 Helen : Oh Nikki. I... wanted to talk to you about Carol Bytes.

Helen : I didn't have her shipped out, it went over my head. And if you think it was to stop her suing us for negligence then I'm absolutely sure you're right.

Nikki : Oh great. Even more amazing to me you can stick your job Miss.

Helen : So you still don't think you can do any good then ?

Nikki : No. I think you do a really great poster, very eye-catching, totally pointless...

Helen : What you think it's pointless to protect your civil liberties, do you ?

Helen : Because that is what I'm trying to do here Nikki, for all of you none drugs users.

Helen : Because I'm sick of what you have to put up with, and your visitors. All because we don't target the real abusers and get them on some treatement.

Nikki : Are you trying to wind me up ?

Helen : You're not telling me that you take drugs, are you ?

Nikki : No. I'm mot telling you anything. Helen : I'm gonna make a complaint. They're not allowed to do this.

Nikki : But they're allowed to make me squat over a mirror !

Helen : Nikki, they had good reason to suspect that you are dealing drugs.

Helen : No I didn't actually.

Helen : Well you can think what you like. But the fact is they may not find anything on you but they will on others. And the women they don't do drugs will thank us for that.

Nikki : Well fantastic ! I'm really glad you're convinced you're doing the right thing so why just you don't piss off out of my space!

Helen : You really let yourself down Nikki. If episode one focuses on the roles that all people play, episode two focuses on the broader authoritative structures which the characters (as well as us, the audience) inhabit. These include insular, defined structures—such as Larkhall prison itself—as well as broader social structures, such as the English class system. The episode goes on to illustrate the many ways that abuse can flourish within these systems, and how alternative systems can compete for authority.

Although we have already observed the dynamics of the prison for an entire episode, this episode is the first where we get a clear explanation of the rules and regulations which define prisoner life in Larkhall. The writers make expository use of the character of Monica, a newcomer to Larkhall and prison life in general, giving the audience a great deal of information about life in prison. Nikki serves as Monica's guide, explaining various rules and procedures for her benefit.

This outlining of all the rules and regulations during the second episode dovetails thematically with the episode's illustration of the way those rules and regulations can be appropriated for selfish (and often abusive) purposes. The major storylines of the episode all center around bullying, around abuse of the system. The episode also dramatizes the two sets of rules and systems for enforcement—the first set established by the prison bureaucracy, and the second competing system, established amongst the inmates themselves. No authoritative structure is so simple and clear as any initial description could possibly suggest.

In fact, as Helen discovers, the rules and regulations at Larkhall and in the prison system in general allow (and engender) institutionalized, official abuse. In Larkhall, the same offenders are tested for drug-use every month, in order to ensure the prison maintains low usage figures when compared to other prisons. Helen's goal in rigorously enforcing drug-testing and drug-searching guidelines is to eliminate this type of corruption. But by allowing prisoners and officers to report those suspected of drug use, she's created a mechanism to propagate abuse, one where Shell (using Rachel as her pawn) can ensure her enemy Nikki is targeted for a demeaning and abusive drug search. When the DST visits Nikki's cell, the scene clearly echoes a kind of S/M fantasy—the second officer has a grin on her face, showing her enjoyment of the power and humiliation she is inflicting. From Nikki's perspective, the fact that Helen was trying to improve the drug situation at Larkhall makes no difference. Helen created more opportunity for abuse, very personal, humiliating abuse, which, in Nikki's mind, is the only possible outcome of the prison system and the power wielded over the prisoners by the officers.

Of course, the competing system of authority, the one enforced by the inmates themselves, is even more abusive (and also more effective). The DST searching Nikki and her cell for drugs is cross-edited with Denny and her gang searching Zandra for drugs. And it's no accident that it's the prisoners, not the DST, who manage to find drugs during their search. Both scenes are shockingly graphic, and Zandra's "de-crutching" is a wonderful contrast with the DST's mirror technique, which may be less physically brutal, but no less violating. Not only can established procedures and bureaucracy be turned into tools for abuse, but they are also ineffective. The most effective power structure in the prison is the one created and maintained by the prisoners themselves, because unlike the official bureaucracy, the informal self-rule system results from a true understanding of the people, relationships and nuances involved, and provides a violent response to anyone who attempts to upend the system.

Just as the prisoners take the opportunity to create their own power structure, and the officers take the opportunities provided by the official rules to inflict abuse on inmates, Larkhall offers prisoners and officers alike the ability to thwart the impenetrable English class system. No power structure is safe in Larkhall. When Sylvia (aka Bodybag), a working class prison officer, processes the intake for Monica, an upper class financial advisor, she inflicts as much abuse on Monica as Larkhall's rules and regulations will allow. Monica's accent is mocked by Zandra, and Bodybag specifically references Monica's wealth. Stuck in prison, Monica serves as an opportunity for class-based revenge. Working-class Bodybag is sick of being looked down on by posh women like Monica, and now she's got her chance to take out all her resentment and anger on the symbol of her own ongoing oppression.

For the prisoners as well, Larkhall offers at least small freedoms from class-based oppression. With the story of Julie S's son and his trip with his boarding school friend, we see a working class character who is literally silenced by her class, by her accent. She is not able to call her son's friend's mother to give permission for his trip for fear of revealing she's working-class (in fact, a prostitute), and not a middle-class travel agent. And for the second time this episode, Monica offers respite and relief from class-based oppression: she makes the phone call on Julie S's behalf, providing permission for the trip in her posh accent.

Most women in Larkhall are trapped by their class background, both in large ways (ie getting stuck in prison, either as a prisoner or an officer) and small (ie not being able to make the phone call). No wonder Bodybag unleashes vengeful abuse when she gets the chance. In a subtle way, the official Larkhall rules and regulations parallel the English class structure-both engender abuse, and both become permeable within the insular world of the prison. No matter how helpfully Nikki explains the prison rules to Monica, they will never be comprehensible and consistent, but instead will be undermined (by the prisoners enforcing their own power hierarchy) or abused (by the officers) whenever the opportunity arises.